Sindie +Cl utilizes a technique known as Monochromatic Wavelength Dispersive X-ray Fluorescence (MWDXRF) - delivering exceptional reproducibility. It delivers both sulfur and chlorine trace analysis with one push of a button and zero hassle. Samples are measured directly, which means it can analyze even the heaviest of hydrocarbons like crude oil or coker residuals, without the hassle of boats, injectors, furnaces, or changing detectors.

Tougher regulations are challenging refiners to produce higher quality products while trying to maximize efficiency. In the last decade, national regulators in places like the US, Europe, China, and India have implemented or plan to implement requirements for total sulfur in gasoline and diesel levels as low as 10 ppm. Increased hydrotreating and modifying crude slate are some of the levers that can be pulled to help lower sulfur levels in finished products. Hydrotreating catalyst life depends on the feed and operation of the unit. Increased monitoring will be critical in meeting these requirements and maximizing efficiency. WDXRF has proven to be a fast, easy, and precise method to measure sulfur in hydrocarbon streams. In order to meet these lower sulfur levels, refineries must invest in new or upgraded equipment, modify operations or a combination of both. Regardless, it will increase the cost of producing diesel and gasoline.

The availability of different crude types has increased in recent years. Heavy, sour crudes provide a cost advantage as these are priced lower. Refiners have modified equipment and operations to accommodate this lower-cost crude. Refiners modified equipment and operations to accommodate the cheaper crude. Figure 1 illustrates the trend of US sulfur content and API Gravity from 1985 through 2015. Crude trended heavier and sulfur content increased as technology improvements were made to suit these cost-effective feedstocks. Advances in drilling techniques led to readily available light tight oils (LTO) to serve the refining market and lower dependence on less-stable crude sources. Although these feeds were lighter and had little sulfur, they pose other challenges to refiners. Specifically, they tend to be high in waxes and are prone to fouling. 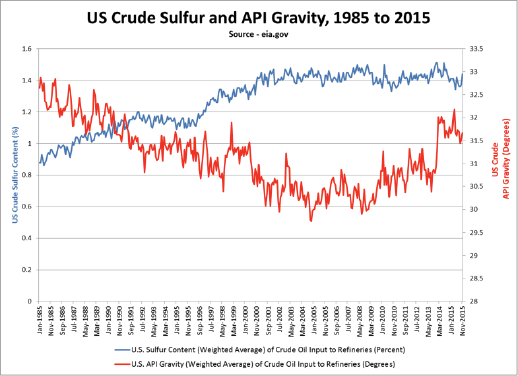 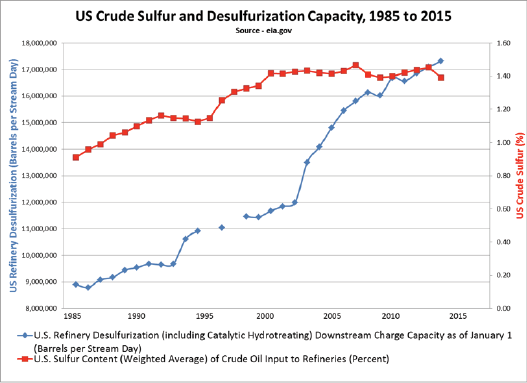 As crude sulfur levels increased, refiners invested heavily in sulfur removal. This was done to capitalize on the cheaper high sulfur crude as well as meet increasingly stringent sulfur specifications on finished products. Between 1985 and 2015, desulfurization capacity nearly doubled from 8.9 million barrels per stream day (BPSD) to over 17.3 million barrels per stream day. Figure 2, shows the relationship between US crude sulfur levels and US refinery desulfurization capacity.

For the implementation of low sulfur regulations, refiners are looking at increasing desulfurization at the fluid catalytic cracking unit (FCCU). The entire feed can be pre-treated or the gasoline can be post-treated, or a combination of both. Careful consideration must be given to factors such as hydrogen availability, heat balance, catalyst type, incoming sulfur content, feed nitrogen content, and planned cycle life. Pre-treating feed provides several advantages for sulfur removal. Pre-treating will remove metals and nitrogen, which are poisons to the FCCU catalyst. Additional hydrogenation from pre-treating will increase conversion in the FCC process. Conversely, pre-treating can be very expensive and may not be possible due to heat or hydrogen limitations. Post-treating the gasoline stream may be an easier option, although there is significant reduction of octane in the process. FCCU gasoline contains valuable olefins that contribute to the octane. Post-treatment will reduce the octane number of the gasoline by conversion of valuable olefins, which must be supplemented by reformate.

For every part per million of sulfur removed, a refinery spends significant money on capital, hydrogen, catalyst, and energy. The related downtime to catalyst changeout must also be factored into the equation. Catalyst has a finite life, and that length of time is dictated by how the hydrotreater is operated. By varying temperature, space velocity, and hydrogen partial pressure, sulfur removal and catalyst life are impacted. Crude slate can be modified to reduce total sulfur content and reduce strain on sulfur removal equipment. Crude swaps come at a cost, either in the form of higher purchase price, creating problems on other refinery units, or product yield.

Regardless of what method is utilized to produce gasoline at these lower sulfur levels, monitoring sulfur levels will be critical in controlling costs. Optimization is dependent on knowing the sulfur levels at all times, accurately and reliably.

There are a number of different technologies available on the market for testing sulfur in liquid petroleum products, due to regulations and requirements around the world.Table 1 outlines the different relevant technologies and their correlating methods. Process analyzers based on these technologies typically correlate to the respective laboratory method, or in some cases may have a method of their own.

In this paper, we will discuss the performance and precision of the D7039 method using MWDXRF technology. This technique utilizes high-performing doubly curved crystal (DCC) optics coupled with a low-power X-ray tube creating a low maintenance, highly precise technology. MWDXRF is a simplified and highly robust X-ray technique which provides sub-1 ppm sulfur detection. An MWDXRF analyzer engine (Figure 3) consists of a low power X-ray tube, a point-to-point focusing optic for excitation, a sample cell, a second focusing optic for collection and an X-ray detector. The first focusing optic captures a narrow bandwidth of X-rays from the source and focuses this intense, monochromatic beam to a small spot on the sample cell. The monochromatic primary beam excites the sample and secondary characteristic fluorescence X-rays are emitted. The second optic collects only the characteristic sulfur X-rays and focuses them on the detector. The analyzer engine has no moving parts and does not require consumable gasses or high temperature operations. MWDXRF removes the scattered background peak created by the X-ray tube increasing the signalto-background ratio (S/B) by a factor of 10 compared to conventional WDXRF technology. The S/B is improved by using the monochromatic excitation of the X-ray source characteristic line. Additionally, the focusing ability of the collection optic allows for a small-area X-ray counter, which results in low detector noise and enhanced reliability.


The WDXRF technique has been an accepted practice for measuring sulfur in petroleum liquids for many years. However, when the first regulations requiring sulfur in diesel moved to 15 ppm or less in 2006, improvements to the analytical instruments and a revision of the method was required to meet the need of new regulations. Similar evolution of the UVF method has taken place while EDXRF has not yet established itself as a viable ultra-low sulfur measurement technique. MWDXRF, on the other hand, was developed specifically to address the need of refiners and petroleum distribution partners for a simple measurement technique, ideally suited for single element, ultra-low sulfur measurements.

The D7039 method (MWDXRF) is essentially a subset of D2622 (WDXRF) with some important distinctions. The excitation X-ray beam of a WDXRF instrument is polychromatic whereas the MWDXRF excitation beam is monochromatic. For both, the output of the X-ray tube comprises the characteristic energy of the target element and the Bremsstrahlung spectral energy associated with the production X-rays by electron acceleration in a vacuum tube. The target element is chosen for a characteristic X-ray just high enough in excitation energy to produce X-ray fluorescence of the element of interest (sulfur), but low enough to minimize background scattering.

WDXRF instruments aim the multi-energy beam at the sample and the resulting beam is typically collimated and aimed towards a diffraction crystal, where it is then diffracted to a detector. Acting as a filter, the diffraction crystal is selected and physically arranged to direct the characteristic X-rays of the element(s) of interest towards the detector. The detector sees a spectral background with distinct peaks associated with the element(s) of interest rising above the background.

MWDXRF instruments, on the other hand, direct the excitation beam to a doubly curved crystal (DCC), selected and aligned such that the maximum beam flux is captured and only the characteristic energy of the target is diffracted towards the sample. Figure 4 illustrates the polychromatic (left side) and monochromatic (right side) excitation beams. With the DCC, the monochromatic excitation is a highly focused, single energy beam incident for the sample. This in turn results in a cleaner fluorescence signal of the sample with far less scattering, which is then directed to another doubly curved crystal for selecting only the characteristic energy of the element of interest to be diffracted to the detector. The end result is a single energy peak with very little spectral background. This is what delivers a signal-to-background ratio improved by a factor of 10 over WDXRF. It also allows use of a much lower power X-ray tube. Figure 5 illustrates the impact of the second DCC.

FIGURE 5: FLOURESCENT SIGNAL
BEFORE DCC (left) AND AFTER DCC (right) 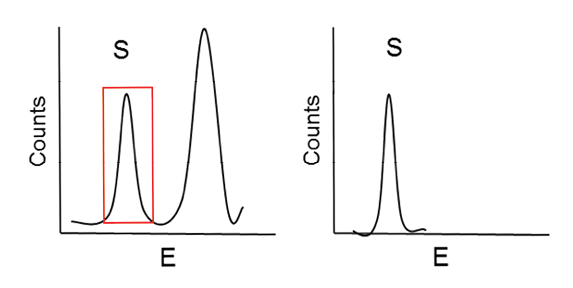 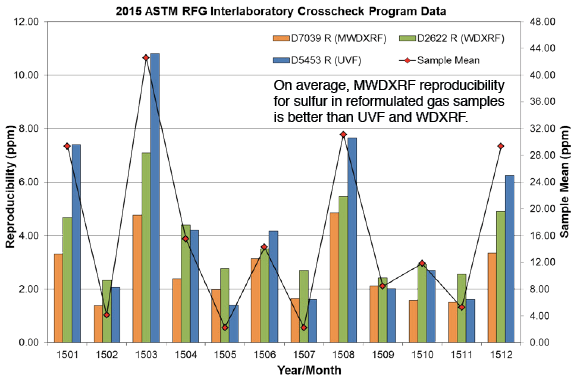 American Society for Testing and Materials (ASTM) methods such as D7039 require full precision statements that include a repeatability and reproducibility component. Repeatability (r) is the variation of two measurements within a 95% confidence interval taken on one instrument of the same sample under the same operating conditions. Reproducibility (R) is the variation of running the same sample at different test sites using similar equipment. The ASTM D7039 precision statementwas updated in 2013 to include a repeatability (r) for all products of 0.4998 * X^0.54 and a reproducibility (R) for all products of 0.7384 * X^0.54. With process instrumentation, reproducibility becomes critical. If the process can be continuously and quickly monitored, variation can be identified and optimization can be handled. As compared with the other methodologies in Table 1, D7039 offers superior reproducibility from 5-10ppm which is critical to meet ultra low sulfur regulations. As seen in Figure 6, MWDXRF provides better reproducibility at the Tier 3 levels of 10 ppm sulfur in reformulated gasoline. This R value can help a refiner justify the economics of installation quickly when process optimization can be achieved faster.

Note that the precision statements for ASTM D7039 for the MWDXRF technique are based on the range of the method, 3.2 to 2,822 ppm, which far exceeds the needs, when interested in measuring sulfur in finished product such as highway diesel or gasoline. The Interlaboratory Study #761 results, gathered and analyzed in accordance with ASTM D6300 methodology for sulfur samples limited to ≤25 ppm S, show the repeatability (r) = 1.1 ppm and the reproducibility (R) = 1.3 ppm.

The most important characteristics of a good analyzer are reliable performance, a high degree of up time, superior stability, and good reproducibility, especially in the range of ≤10 ppm for sulfur. Delivering good precision at the control target is critical to sulfur measurements; it's even more valuable than the lowest possible detection limit. Powered by MWDXRF, Sindie +Cl delivers the precision, hassle-free operation, and flexibility to meet the application needs of the industry’s dynamic landscape