Organic chlorides do not occur naturally in crude oil; however, their presence remains a disruptive issue in the refining industry. Varying amounts of organic chloride can make their way into crude oil as a result of cleaning operations in pipelines and other refining equipment. Although very small concentrations of organic chloride can typically be handled by refineries with no deleterious effects to the equipment, once they reach a certain threshold, severe damage can ensue1. 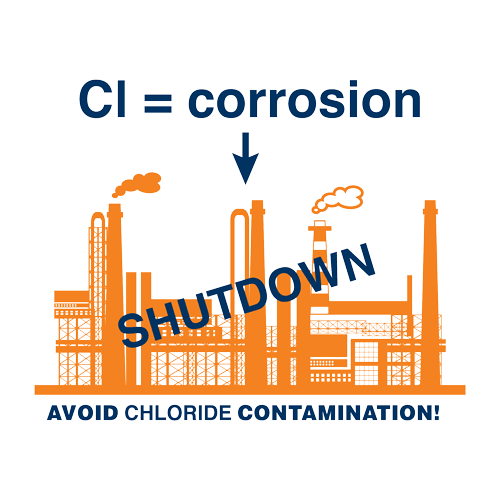 The dangers of chloride-contaminated crude oil are well-known to those in the oil industry. Among these dangers is the creation of hydrochloric acid, which can lead to the corrosion and damage of pipelines and refining equipment. NACE International, a professional organization committed to helping reduce the economic impacts of corrosion, reports that corrosion-related maintenance, vessel expenditures, and fouling directly cost the United States alone $3.7 billion each year. This total doesn’t take into consideration the costs of unit outages, decreased capacity, or premature turnarounds related to corrosion2.

To avoid the pitfalls of corrosion and other chloride-related concerns, countries throughout the world have created and implemented standard methods to ensure that the organic chloride content in their crude is kept below a certain level. Such methods include the United States’ ASTM D4929 and Russia’s GOST R 52247 (a modified translation of ASTM D4929-2004) and GOST 33342 (a modified translation of ASTM D4929-2007), each to be discussed in further detail later in this paper. Unfortunately, as we sometimes discover, certain methods are more precise than others when it comes to the determination of organic chloride contamination early on, before serious damage can be done.

A LESSON IN DETECTION

A relevant, massive-scale example of the urgency required when monitoring for organic chlorides is the recent instance of the Russian Druzhba Pipeline’s crude oil contamination – the effects of which are still being felt throughout all of Europe. The Druzhba Pipeline, which is one of the longest oil pipelines in the world, began operating in 1964. It begins in the Russian city of Almetyvsk and spans the course of 3,400 miles including splits in various directions; meandering through and servicing several European countries including Poland, Germany, Belarus, Slovakia, Ukraine, and the Czech Republic.

The Druzhba carries between 1.2 and 1.4 million barrels of oil to these countries on any given day; with the capacity to increase that transport to 2 million barrels should the need arise3. Typically, Russian crude exports are considered extremely reliable; but in April of 2019, the oil flowing through the Druzhba was found to have organic chloride concentrations in the naphtha fraction that far exceeded the 10 ppm limits laid out in GOST R 51858, a Russian standard that encompasses organic chloride specifications. Concentrations from the crude that arrived in Belarus were reported to be between 150 and 300 ppm when measured between April 19th and April 22nd of 20194. Given the wide array of countries depending on the Druzhba Pipeline for their oil, it was no surprise that in late April of 2019, the situation made international headlines.

Russia is the world’s second-largest exporter of oil – and the Druzhba Pipeline, controlled by a Russian state-owned company, is Russia’s main source of transportation for this oil. As refineries on the receiving end of the pipeline gained knowledge of the chloride-contaminated crude, they began halting all oil imports from Russia – a stalemate that ended up lasting for six weeks.

Russia’s oil production rapidly dropped to an 11-month low5. Oil prices throughout Europe skyrocketed to over $75 a barrel, a six-month high; and purchases of Russian oil were slashed by nearly a million barrels a day4 – over 80% of the Druzhba’s typical daily crude exports alone, prior to consideration of Russia’s other exporting channels.

Being that the crude was unusable in its current state without dilution, countries who normally depend on Russia for oil were forced to tap into their own crude reserves5. Germany faced a heating oil shortage soon after the interruption began3. In other countries, in instances where the product had been paid for prior to the realization that it was poisoned, refineries were forced to store the contaminated oil elsewhere until they have a way of diluting the organic chloride concentrations within it to a safe level – an extremely time-intensive procedure that can easily cost millions4.

When all is said and done, the Druzhba Pipeline disaster could cost Russia an estimated $3 billion in damages5, in addition to the harm done to Russia’s economy and reputation, concerns stated by Russian President Vladimir Putin himself4.

Prior to the Druzhba Pipeline’s oil contamination crisis, Russian refineries had typically adhered to two organic chloride methods encompassed by GOST R 51858-2002. The first of these methods is GOST R 52247, which at its original time of writing was a modified translation of ASTM D4929-2004, containing similar A and B procedures in addition to a third procedure that uses WDXRF with a bismuth internal standard. The second method is Addendum A(6) of GOST R 51858, which is essentially a direct reference to ASTM D4929-99.

Generally, GOST R 51858 requires that organic chloride content in the naphtha fraction of crude oil, up to a temperature of 400°F (204°C), should not exceed 10 ppm. However, in cases where the oil is being exported, chloride content cannot exceed 6 ppm and is typically between 2-3 ppm. Prior to the Druzhba Pipeline crisis, in order to comply with GOST R 51858, organic chloride content testing had to occur at least once every ten days. This requirement changed to once every four hours in the aftermath of the shutdown.

In kind to the Russian GOST, the United States has its own widely-adapted standard for obtaining chloride concentration in crude – ASTM D4929 Standard Test Method for Determination of Organic Chloride Content in Crude Oil. This method was first published with two procedures:

“1.3 Procedure A covers the determination of organic chloride in the washed naphtha fraction of crude oil by sodium biphenyl reduction followed by potentiometric titration.

1.4 Procedure B covers the determination of organic chloride in the washed naphtha fraction of crude oil by oxidative combustion followed by microcoulometric titration.”1

Both Procedures A and B of the original ASTM D4929 method require users to first distill a crude oil sample to 400°F, then wash the resulting naphtha fraction with caustic to remove H2S, and finally, wash with water to remove inorganic chlorides. Afterwards, either Procedure A or B is used to determine chloride content using back calculation.

THE CHALLENGE: EXPLORING THE NEED FOR A FASTER & EASIER ALTERNATIVE

While the distillation of the sample during preparation wasn’t something that could be eliminated, the chloride analysis portion of both Procedures A and B were time-intensive, difficult processes. This left room for a simplified process to be created. On October 15th, 2017, ASTM approved the addition of Procedure C to D4929:

“1.5 Procedure C covers the determination of organic chloride in the washed naphtha fraction of crude oil by X-ray fluorescence spectrometry.”*

Procedure C uses X-ray Fluorescence (XRF), a faster, easier, and more precise analyzing alternative to both Procedures A and B. In order to include Procedure C with Method D4929, an interlaboratory study (ILS) involving eight participants was performed. Each of the participants distilled ten crude oil blends of varying nominal organic chloride concentrations in blind duplicate. Resulting naphtha cuts were washed and analyzed using XOS’ Clora Monochromatic Wavelength Dispersive X-ray Fluorescence (MWDXRF) analyzer, among other instruments with varying types of XRF techniques. The results were compared with the original method precision statements for Procedures A and B (Figures 1 and 2). The ILS found the following: 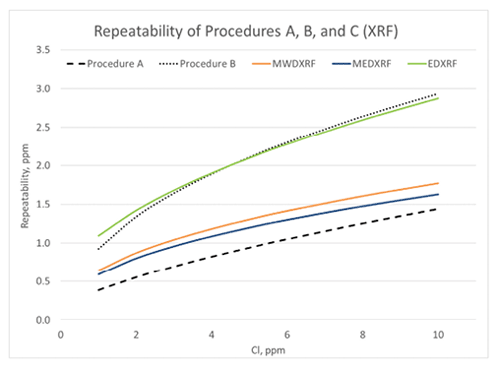 Based on these results, it can be stated that Procedure C to ASTM D4929 provides a viable alternative to both ASTM D4929A and D4929B that is gaining in popularity.

Since its approval in 2017, Procedure C to ASTM D4929 has been on the rise in popularity, as indicated by information collected from labs by the Crude Oil Proficiency Testing Program (PTP) (Diagram 1). Similar methods have been created and implemented by other countries throughout the world. As previously mentioned, Russia’s method for obtaining organic chloride concentrations in crude oil is similar to that of the United States’ ASTM D4929.

After the Druzhba Pipeline disaster, refineries throughout Russia were forced to consider alternatives to the methods they were using in the hopes of reducing the risk of repeating what some have called Russia’s worst disaster in oil5. Russia’s GOST 33342, a procedure comparable to that of ASTM’s D4929C that allows for the use of MWDXRF, provides an easier and more precise alternative to other GOST methods – and many refineries impacted by the contaminated crude, as well as those wary of avoiding similar instances, have begun to favor it over GOST R 52247.

Refineries throughout Russia adapting to GOST 33342 have had to increase their testing cadence from once every ten days to the newly-mandated once every four hours. Precision levels available through XRF analyzers compliant with 4929C and its global counterparts are much better than those possible when using procedures like A and B of 4929, helping to ensure that organic chloride concentrations are well below the maximum levels permitted by the GOST with ease. It is also understood that the Druzhba Pipeline situation has led to intentions of adopting a new version of GOST R 55247 in Russia within the next year. This new version is expected to be a modified translation of ASTM D4929-2019, containing similar A, B, and C procedures with the addition of a fourth procedure that uses WDXRF with a bismuth internal standard.

Russia’s Druzhba Pipeline contamination case is a globally relatable example of the ill effects of organic chlorides in crude oil. Though other methods are available, ASTM D4929C, GOST 33342, and similar XRF methods allow refineries to obtain organic chloride concentrations in crude oil with increased precision and efficiency. Such methods are quickly gaining popularity over their alternatives. XRF analyzers such as XOS’ Clora benchtop unit provide viable solutions in complying with such methods; with the potential to save money, refineries, equipment, economies, and in some cases, even lives.

*Each of the three procedures of ASTM D4929 require distillation prior to sample analysis.

Clora 2XP complies with ASTM D4929C and D7536 and is a viable solution for the determination of organic chloride content in crude oil. Clora 2XP delivers twice the precision for total chlorine analysis in liquid hydrocarbons such as aromatics, distillates, heavy fuels, and crude oils, as well as aqueous solutions. Compliant with ASTM A7536 and D4929 methodology, Clora 2XP is ideal for testing related to catalyst poisoning in reformers, and sites with catalytic crackers and hydrocrackers. In addition, its automatic sulfur correction is perfect for high sulfur and low chlorine applications, such as crude oil and VGO. Powered by MWDXRF, Clora 2XP does not require gasses or high temperature processes, equating to easy operation and minimal maintenance requirements. 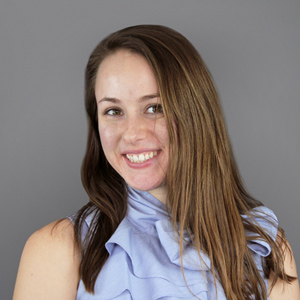